Welcome to Hope Dwellers!  Sign up for our newsletter and receive our free printable “What is a Hope Dweller?”:I want to Subscribe!

You are here: Home / Know God / Easter From the Eyes of a Woman

The holiday of Easter is very special to us as believers because we spend time remembering all that Jesus did for us at the cross and resurrection.  This year, let’s shift our perspective a little and look at Easter from the eyes of a woman who was there with Him.

Jesus had quite a following while on earth, and yet, there were only a few people who followed Him all the way to the cross.  Even the disciples, except for John, stayed at least a distance away on that horrible day.  But there were a few women who pressed in and stayed with Him to the end.

Mary Magdalene was one of those women.  Her story is one you’ll want to hear!   Her incredible transformation, her intense dedication and determination, and her new irresistible calling, all because of Jesus, will inspire and encourage you.

But even more, I believe you’ll be encouraged to see how Jesus elevated the status of women for that day and for all days!

Let’s look at Easter from the eyes of a woman!

We are told in Mark 16:9 that when Mary Magdalene first encountered Jesus, He had cast 7 demons out of her.  As she stood at the cross that dark day, I wonder if Mary Magdalene was thinking about her life before she had met Jesus and what He had done to heal her in spirit, soul, and body.

Maybe her former demons had tortured her with constant disturbing thoughts, and she had succumbed to them and the chaos they brought to her mind.  Maybe those thoughts had erupted outward, and she had hurt others with her sharp words and shrill rants and cutting accusations.

She might even have destroyed property in angry fits of frustration.  Or she could have wondered around aimlessly in bewildered confusion.

Whatever behavior was caused by those demons, Mary had to be deeply troubled, disturbed, and unstable.  My guess is that she struggled to know her identity and to feel like she was acceptable to anyone.

Photo by Tessa Rampersad on Unsplash

But Jesus changed all of that.  She was made new!  Her life was completely transformed.

Out of a grateful heart, Mary Magdalene and other women who had also been healed chose to follow along with Jesus and his disciples as He went through all the cities and villages sharing the good news of the Kingdom. (Luke 8:2)

Normally, a rabbi would never have allowed women to follow him as he went teaching.  But Jesus had a different view of women!

Mary trusted Jesus and continued following Him even to the cross.  He had brought her stability and forgiveness and a chance to start over.

Mary believed Jesus was who He said He was.   Yet here He was on a cross.  How could this be the way things would turn out?

She must have had so much confusion, doubt, and even anxiety in that in-between time.  What would she do without Him?

We’re told that on the first day of the week, the third day of it all, Mary Magdalene came back to the tomb with other women. They brought spices with them to anoint the body of Jesus.

Now let’s stop here a minute…this tomb had been sealed with a very big stone.  How did these women think they were going to reach Jesus to anoint His body?

Even more astounding is the fact that the tomb was probably made in a depression of the earth, so the stone would have been rolled down an incline to reach the mouth of the tomb.  Some believe it would have taken at least 20 men to move this stone out of the way!

Can you imagine the spunk of these women?  Mark 16:3 says that on their way, the women were wondering who would roll the stone away for them.  In this culture and in this time of history, they were incredibly bold to believe (have faith?) that a group of men would be willing to help them do such a thing.

Yet they need not be concerned.  An angel had rolled the stone away!    The tomb was empty and Jesus was no longer there!

Mary didn’t know what had happened for sure, but she knew she had to go tell Peter and John.  And she took off to find them.

Interestingly, these men, who had followed so closely to Jesus and heard all His promises, had not shown up at the tomb like these brave women.

But Mary’s dedication and determination to follow Jesus, wherever He was, helped her push past any fears, social norms, and even her own comfort zone so she could find Jesus.

Mary raced to Peter and John and gave them the news.

“They have taken the Lord out of the tomb, and we do not know where they’ve laid Him.”  John 20:2 ESV

Mary Magdalene herself was still struggling to believe that Jesus had risen.  Maybe she felt like Peter and John would know something, or that they could do something about finding the body of Jesus.

Either way, Peter and John took off to the tomb.  At least they believed Mary.  Luke 24:11 tells us that the other disciples didn’t believe.  They thought her words were nonsense.

(Isn’t it hard not to be believed?  To feel like your words and experiences and thoughts are seen as foolish?)

But Mary didn’t let anyone else’s opinion stop her.  She followed Peter and John back to the tomb.

John 20:9-10 tells us a most remarkable thing.  Peter and John found the tomb empty and yet still didn’t understand the resurrection.  They went back to their homes.

Wait – What???  Why didn’t they start looking for Jesus like Mary Magdalene was doing??!!

After the 2 disciples left, Mary was just spent.  She couldn’t even process what had happened.  She just stood weeping outside the tomb.  How had she missed Jesus?

Even in her grief, she had to look one more time.  She stooped to look into the tomb and found 2 angels sitting where His body had been, one at the head and one at the feet.

I think we would be astounded to see angels sitting in a tomb, but Mary’s response reveals her devotion:  “They have taken away my Lord”  (John 20:13).  Jesus was not just her friend or pastor.  He was her Lord – the One to whom she belonged, and she had to find Him.

Still confused, Mary Magdalene turned around and there was Jesus!  (Oh, maybe sometimes we need to quit staring at a lifeless place and turn around to see Jesus, too!!!)

Something about Jesus’s new body was different.  She didn’t recognize him and thought He was the gardener.  So she asked Him where the body of Jesus had been taken.

Jesus asked her why she was crying.  (Sometimes I need to ask myself that same question.  Jesus has conquered everything and God keeps His promises.  Why should I be in despair?)

Photo by rawpixel.com on Unsplash

But then Jesus calls her by name!  What a difference it makes to know that Jesus knows who we are!  That He knows us intimately and is no stranger to what is going on in our lives!  He gives us our true identity!

When Mary heard her name, her eyes were opened and she could recognize Jesus.  She wanted to grab hold of Him, but He would not allow it.  He had something more for her.

Just think of this…Jesus, the Son of God Himself, had risen from death back to life.  The incredible power that He demonstrated by His belief in God’s promises made the impossible possible.

And He first revealed Himself and what He had accomplished to a woman!

Can I hear a “Halleluah!”?  Do you see the value and worth and dignity Jesus gives all women by doing this?

And He goes on to give Mary a calling:

“Go! Share what you have seen and experienced.  Tell those men that I am here and I am going back to My Father!”

Now this part of the story excites me almost as much as Jesus conquering the grave:

Jesus had given Mary a voice.

She had witnessed something life-changing, history-making, mind-blowing, incredible!  And she could go out and share her story.  Not the story of the disciples.  Not the story from the Patriarchs of the past.

This was her story – her experience – to tell.  She now had a voice.

Amazingly, Jesus didn’t express any condemnation towards the men -those men who didn’t show up at the cross and went back home even after seeing the empty tomb.

Instead, He called them His brothers!  What grace!  And the message He gave Mary was to tell them He was ascending to His Father and their Father.  Jesus had made the way for all of us to be reconciled to God so that God could now be our Father as well.

So let me say this:

You have a story to share!  It doesn’t matter if you lived a perfect life or not.  This story is about Jesus and what He has done in your life.  He has made you right with God.  You are now a daughter of the Most High God and what you have to say matters!

Let’s have the courage of Mary Magdalene to always be looking for Jesus, following Him, and then going to tell others what we have seen and experienced.

We can tell our story like no other.  Because our story is about our wonderful Savior and all that He has done and is doing and will do for us.  We certainly have something to say!

Learning to use my voice, too,

In the comments below,  please tell us one thing that you have seen or experienced with your Friend, Jesus.  Your voice might just give another woman the courage to use her voice!  Thanks!

To celebrate Easter with you, I made a little gift for you – a desktop wallpaper you can download to remember the truth that Jesus has given you a voice.  What you have to say matters!  3 steps to get your gift:

2.  Right-click or double-click on the image that pops up on your screen.

3.  You should see an option that says “Use Image as Desktop Picture”.  Click on that and you should have a new desktop screen!

Actual Scripture quotations are from the ESV® Bible (The Holy Bible, English Standard Version®), copyright © 2001 by Crossway, a publishing ministry of Good News Publishers. Used by permission. All rights reserved.

♥♥If you read the accounts of the resurrection in each of the gospels, there are some details that seem a little confusing – maybe even contradictory.  But I think this post from Answers in Genesis does an excellent job explaining how it all fits together!

Subscribe to get the latest news, encouragement, and helpful stuff! 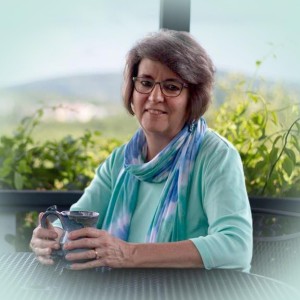 Welcome to Hope Dwellers! My name is Trish, and I'm so excited you're here! I love the "thrill of the find", and there's nothing more thrilling than finding out more of who God is and who He's made us to be. That's what Hope Dwellers is all about! Read More…

Stay up to date

Subscribe to get all the latest news, encouragement, and extra stuff!

If you seek, you just might find! Here’s the place to look.

Find the latest on Instagram and please join the #hopedwellers

Yes, You Can Be Fit and Fabulous!